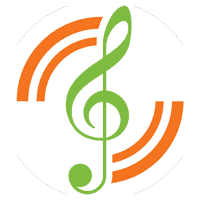 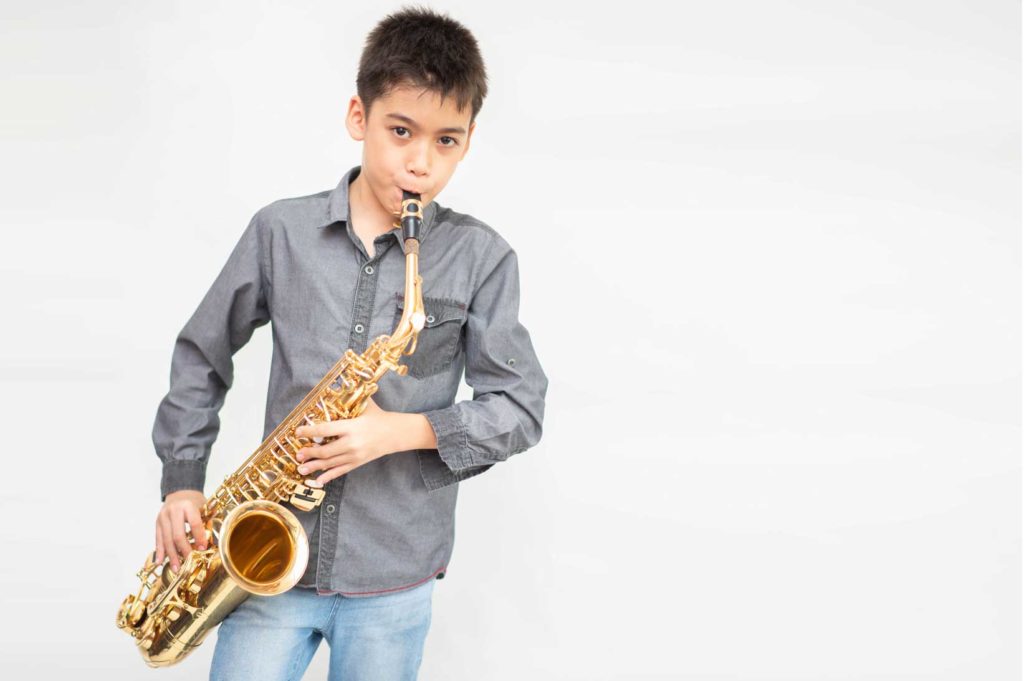 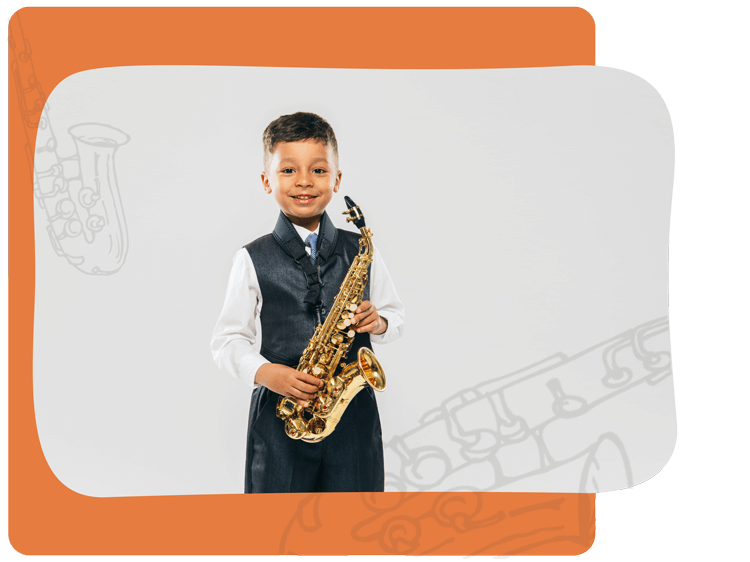 Is The Saxophone Hard To Learn?

The truth is the saxophone is not difficult to play but regardless of your previous skill level, to master playing this instrument you do need highly-knowledgeable and experienced instructions that can provide private, one on one saxophone lessons tailored to your learning style.

We at Mississauga Fine Arts Academy offer you the best chance to learn to play the saxophone from some of the best saxophone teachers in Ontario.

Regardless of your previous knowledge and saxophone playing skills, our teachers will support you, your learning style, special considerations, and will guide you every step of the way to help you master this instrument. It is of course faster and easier if you already have some experience or knowledge about any woodwind instrument, like the clarinet, but any self-disciplined and dedicated person can easily start from the very beginning and succeed.

We strive to match you with one of our talented instructors that will inspire you to practice and help you build your fundamental skills, which in return will guarantee your success. 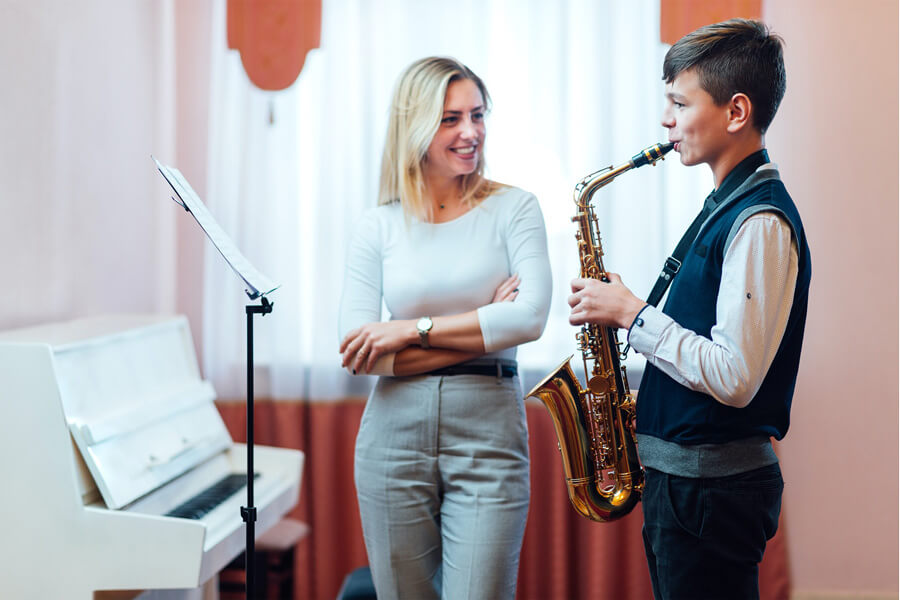 Our music school offers a cutting-edge curriculum developed in collaboration with the Royal Conservatory of Music providing our students access to a nationally accredited program and giving them an excellent foundation in their music education. Our music teachers will work with you to prepare you for every level of your Royal Conservatory of Music examinations (RCM exams).

Our music students look forward to participating in their organized recitals and many music festivals and events across Ontario.

Our students come for in-person private saxophone lessons not only from Mississauga, but also from Brampton, Oakville, Milton, Etobicoke, and the Greater Toronto Area. This is a testimony to the quality of the music lessons provided at the Mississauga Fine Arts Academy and the satisfaction of our students.

What Is A Saxophone?

The body of the saxophone is a conical metal tube with around 24 openings (tone holes) controlled by padded keys and 2 small vent holes allowing for playing music in upper registers.

The soprano and sopranino saxophones are designed like a straight conical tube with a flared bell opposite the mouthpiece.

The alto and other larger saxophones have a detachable neck just above the highest tone hole. The set of curves near the bell is a distinctive feature of the saxophone. 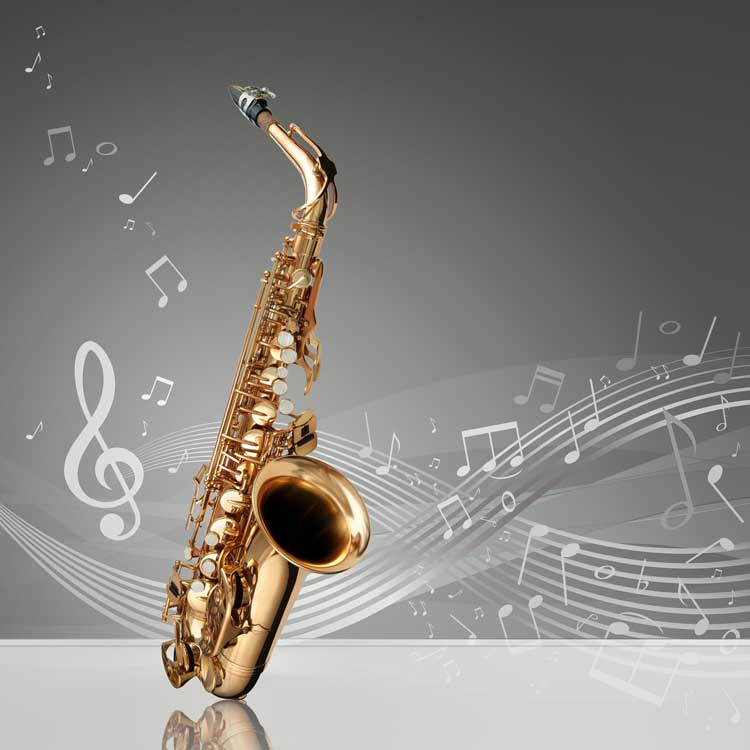 The most popular is the alto saxophone 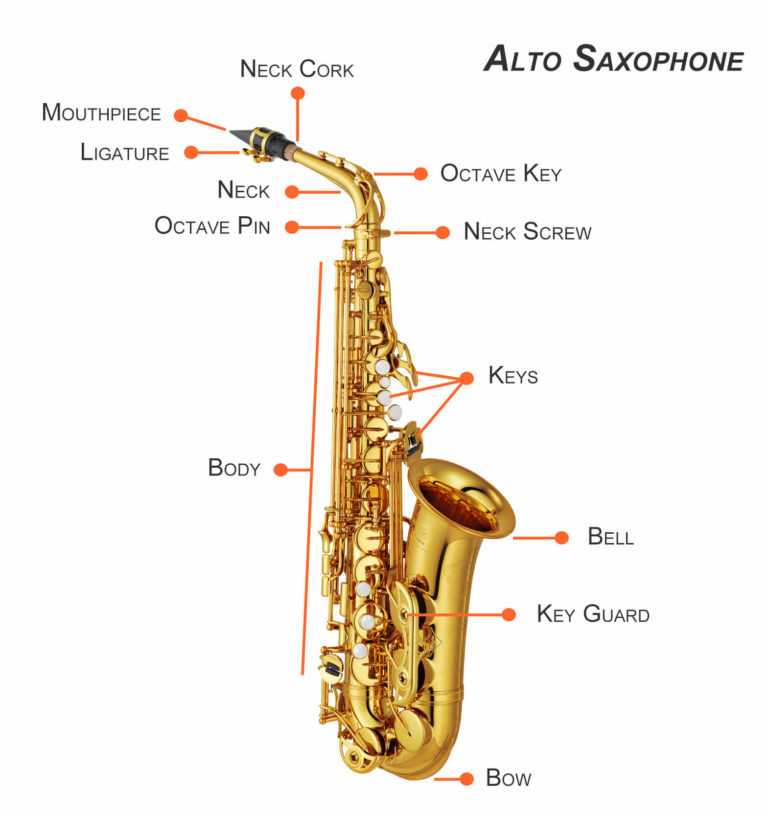 The natural range of the saxophone

The saxophone is available in several different types allowing saxophone players to choose the one that best suits their needs, skill set, and personality. There are five most common saxophone types:

At the outset of your studies, you could rent a saxophone until you are sure what type of saxophone you would like to play.

Here Is How To Play The Saxophone

The most played and beginner-friendly saxophone is the alto saxophone. It gives the player the choice to play a variety of music genres and styles, like classical orchestral music, blues, jazz, and rock and roll music.

A Brief History Of The Saxophone

The saxophone in this image was made by Adolphie Sax in 1857 and was constructed from wood. Later he will switch the material from wood to brass.

Adolphie Sax was first a flutist and clarinetist. Prior to the invention of the saxophone, he worked on improving the bass clarinet and succeeded in extending its range. He continued experimenting with the bass clarinet by adding keys and improving its acoustics. Furthermore, he made changes to the mouthpiece of the clarinet leading to the invention of the single-reed mouthpiece and the saxophone. He made several types and sizes of saxophones in the 1840s and requested patents. He received a fifteen-year patent for the saxophone on the 28th of June,1846, which included fourteen different versions of the instrument. His saxophones were largely used by the French military bands.

When Adolphie Sax’s patent expired in 1866, other instrument makers continued the development and the improvement of the saxophone. This included adding extra keys and alternate fingerings to allow for playing certain passages with ease. 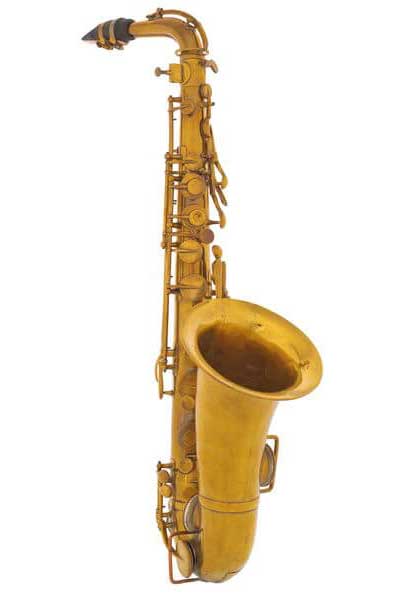 One notable advancement was the use of the left thumb to operate both tone holes using a single octave key, which is still common in today’s saxophones.

Other advances came in the 1930s and 1940s by the woodwind and brass instrument makers C.G. Conn, King Musical Instruments, and Henri Selmer Paris. The modern saxophone, as we know it today, is based on Selmer’s “Balanced Action” saxophone. This sax had balanced key work and distribution of weight. This was followed by the “Super Action” saxophone, which was launched in 1948, and the “Selmer Mark VI” that was refined, manufactured, and widely used in the golden age of jazz in the 1950s and 1960s. In the 1980s Selmer launched the first of the three “Super Action 80” series of saxophones.

The quest was to improve the saxophone’s acoustics, intonation, tone, and ergonomics.

The saxophone is used in many genres and styles of music, most notably in jazz music.

In this video, you can learn more about the influence of Mule and Rascher on the acceptance of the saxophone in classical music and saxophone quartet formations: 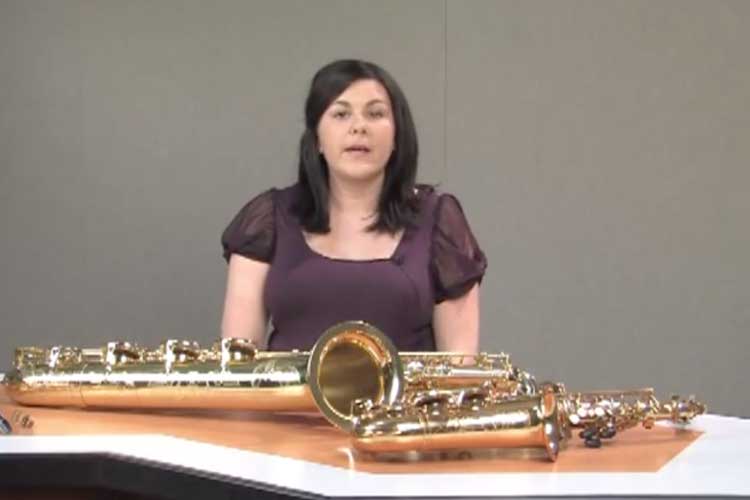 In the 20th and 21st centuries, many classical compositions included the saxophone. Its use includes opera, choral music, saxophone quartets, chamber music, orchestras, and even musical theatre.

Classical composers and compositions include:

The Concerto in E flat major for alto saxophone and string orchestra, Op.109

Concerto for Alto Saxophone and Orchestra 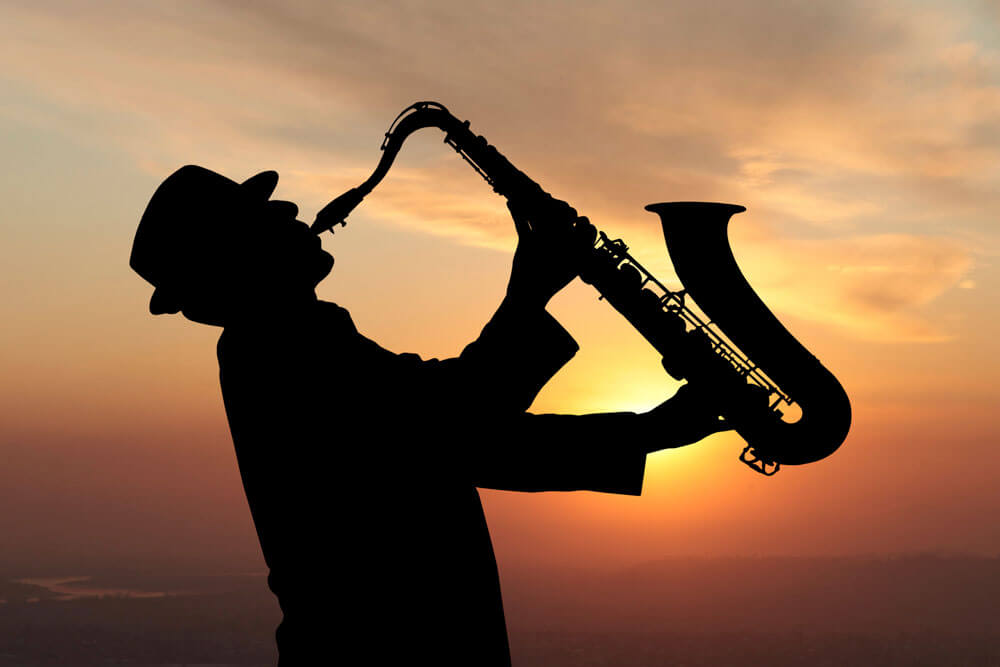 In this 1950s video, you can hear Charlie Parker and Coleman Hawkins playing jazz compositions on alto saxophone: 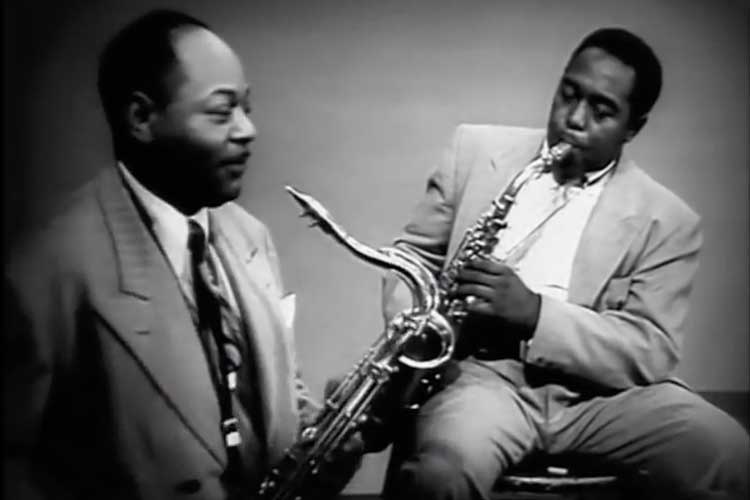 American saxophonist who played R&B, Jazz but also rock and roll. He worked withBuddy Holly, Aretha Franklin, Jimi Hendrix, and the Beatles. He was inducted in the Rock and Roll Hall of Fame, posthumously on March 6th, 2000.

known as “The Big Man” was a tenor saxophonist well known for his musicianship as part of Bruce Springsteen's E Street band from 1972 until his death in 2011.

Canadian-American saxophone virtuoso and multi-instrumentalist based in Montreal. He is best known for his collaboration with indie rock bands like Arcade Fire, Bon Iver, Bell Orchestre, and Ex Eye.

a brilliant tenor and soprano saxophone player, known for his easy listening instrumental composition “Song Bird” but also for many other collaborations like this one seen here in this video clip from Katie Perry’s “Last Friday Night” song: 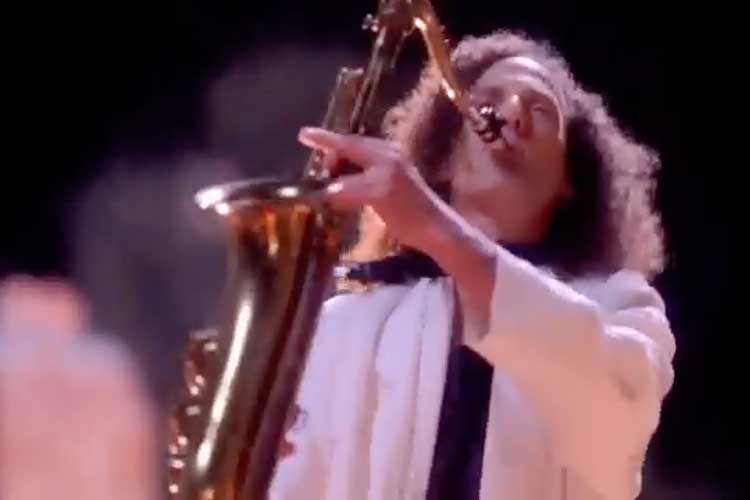 Known as Jimmy Sax, a talented French sax player seen here in this live performance of “No Man No Cry:

Dutch funky sax player who has played with Prince, Pink Floyd, Van Morrison, and Dave Stewart from the Eurythmics. In this video, you can enjoy Candy Dulfer’s sax skills in the “Lily was here” with Dave Stewart: 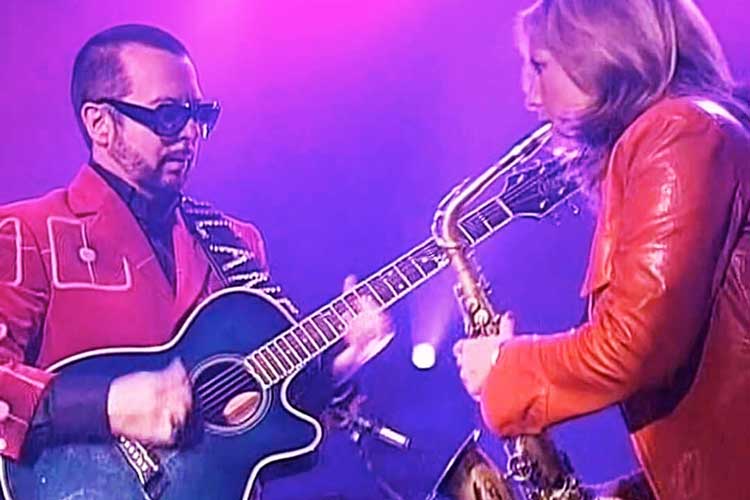 What Are The Benefits Of Learning To Play The Saxophone

Learning to play any instrument has been proven to be beneficial in many ways. The saxophone is no exception. Some of the benefits include: 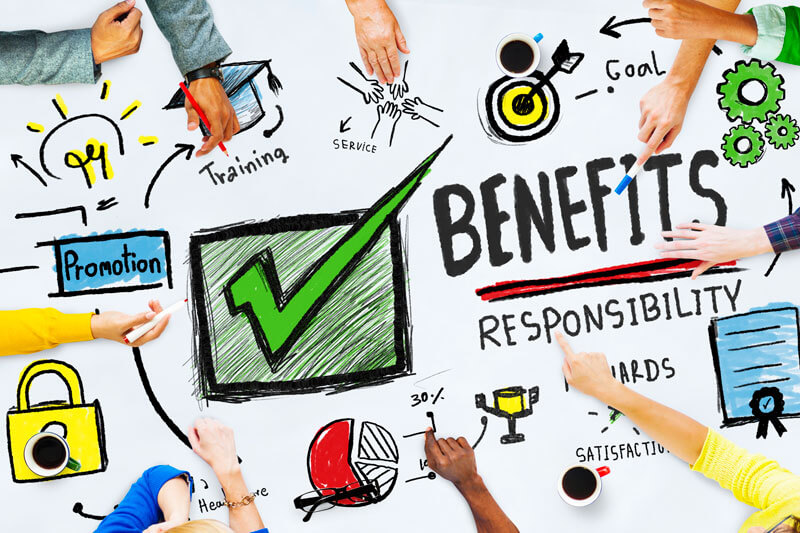 The sound produced when playing the saxophone can be adjusted and modified, in terms of pitch and volume among other things. With the help of many breathing techniques taught by a qualified instructor, the sax player can have better control over the quality of the sound produced by their saxophone. Many saxophone players not too long after starting to play the instrument are able to produce distinct tones and notes. The progression from beginner to intermediate level saxophone lessons is said to be faster than with other instruments.

Our Academy of Music provides the highest quality saxophone lessons as well as many other different types of private music lessons. Our music school has a wide selection of teachers. And to accommodate your busy schedules and lesson preferences, we provide private in class music lessons in Mississauga, Ontario (Peel Region) and online lessons, including:

We provide one on one private music classes for children and adults, including RCM theory classes, in person at our convenient Mississauga location and online saxophone lessons and other types of music lessons.

Lessons are scheduled once a week and available seven days a week. There is a one-time registration fee of $25.00.

No prior musical experience is required to start lessons.

Learning to play the saxophone will bring joy to your life and boost your creativity. Come and become a member of the Mississauga Fine Arts Academy music family! We will ignite your talent within and help you become the best musician you can be. 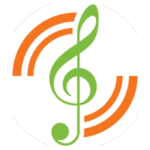 Our goal is to help you in the best way possible.

Our goal is to help people in the best way possible. this is a basic principle in every case and cause for success. contact us today for a free consultation.